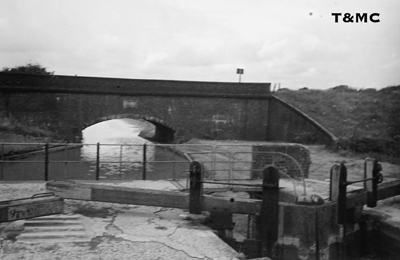 In February 2012, the Club received confirmation from BW that the wooden and scaffolding handrails were temporary measures until a more suitable design could be agreed upon.  The first draft drawings for Bumble Hole and Awbridge locks showed steel handrails but with what can only be described as “twiddly bits” on the ends – ideal for snagging ropes.  The drawings for Dimmingsdale showed more promise but one of the rails still had twiddly bits. The club responded by sending drawings, created by the club’s East Midlands Rep, Mike Harrison, of a simple practical design with no snagging points - very similar in style to the old ones seen here on the Trent & Mersey.

Further BW drawings were then seen for Cladwell, Ebstree, Falling Sands, Otherton, Rodbaston and Stewpony locks with handrails which, although the ends were not as curly as those in the first drawings, still had snagging parts projecting from the ends.  In addition, although there appeared to be split handrails, it was not certain that the bridges themselves would be split eg “A half height indent to be cut in to upstand to allude (our italics) to split bridge deck of original tail bridge”.

The handrails as now installed (April 2012) have been amended so that there are no snagging parts - well done BW for listening!

However, the rails and supporting girders do not blend particularly well with the existing visual intregity of the locks and in some cases (eg Fallings Sands) have reduced the headroom for boats, so that tall pipes, cans and in some cases, cratches, have to be removed.  Whilst this reduced headroom is within the published dimensions for the Staffs & Worcs, we see little point in building to the smallest dimension!

In March 2012, a club member made a Freedom of Information request to BW on two points:

1 He asked for information on the number of accidents known to BW at unfenced bridges at the tails of locks on the Staffordshire and Worcestershire canal (not including the recent drowning tragedy at Stourport) in each of the years 2000-2011.

Answer – “There are no records or reported incidents of persons falling from lock tail bridges, with the exception of the tragedy at Stourport which you have identified in your request.” (BW’s Customer Service Co-Ordinator, 19/03/2012)

2 He also asked to see the assessment of risk to boaters arising from operating the locks in question without the ability to use the tail bridges currently obstructed by scaffolding.

Answer – “Bridges which have been closed have alternative crossing points either via a lock gate walkway with an anti-slip surface and a handrail or a bridge in the immediate vicinity.   A number of other bridges have had temporary or permanent handrails fitted and remain open.  A basic onsite risk assessment was undertaken to decide whether closing the bridge was an acceptable control measure based on having a safer alternative crossing point in the immediate vicinity.  There is no written assessment of the decisions about whether to close or install temporary handrails were based on the judgment of the Engineers and Safety Advisors involved in the project.” (sic)  (BW’s Customer Service Co-Ordinator, 26/03/2012)

The club awaits reports from boaters of the practicality of using these alternative means of crossing the locks in question.  Having to go around a lock to cross it could mean valuable time wasted in an emergency closing of paddles. Please voice your thoughts to the local Waterways Manager, Dean Davies.

At the West Midlands User Group meeting on Wednesday 25 April 2012, there was very lively discussion about the necessity of installing handrails, their placement and style.  The local Waterways Manager and the Principal Waterway Engineer agreed to look again at Falling Sands lock, in particular, to assess the impact of the seriously reduced headroom created by the low intallation of the handrail's supporting girder. They also apologised for not ensuring that warning notices were posted immediately and for the delay in painting the girders white. The PWE is keeping the club up-to-date with developments and has said "we do have some clear ideas on what we could do to relocate the beam and increase the headroom back to its original but we do need to re-consult with the local conservation officer as it will involve partially masking the structure. However, we feel that there is a balance to be had and we can clearly demonstrate the steps we have taken to date and the reason for the proposed change. The architect is preparing some details so we can begin the consultation process and move on with this as quickly as possible."  Excellent news!

There's a balanced and thoughtful anaylsis here by Sarah (Chertsey) on the dangers of health and safety.  Well worth a read.