"Sculptor was built as a Small Northwich motor boat of the Star Class by W. J. Yarwood Ltd in 1935. She was a motor boat of one of 12 pairs of motors and butties and was delivered to the Grand Union Canal Carrying Company in November 1935 along with the butty Toucan, with which she was originally intended to pair.
In 1936, Sculptor's cabin was registered as a dwelling to accommodate '3 persons or man, woman and 2 children'. The registration certificate goes on to detail the route she was going to use as 'Midlands District to London' and that she was to carry general goods. The Master of the boat at that time was George Leese.
During the Second World War the Ministry of War Transport needed additional canal boats to use as 'fire fighting facilities' and Sculptor was first commissioned by them on 5 October 1943 - to be based on the Grand Union Canal in Greenford, Middlesex. At the end of the war, Sculptor was returned to GUCCCo. Some alterations were made to her hull at the time to accommodate pumps, traces of which are still apparent.
Although Sculptor was not in service as a fire-fighting boat during the height of the London Blitz (September 1940-May 1941), she was so engaged during later raids and particularly the V1 and V2 bombardment of the capital between June 1944 and March 1945. As a survival from these desperate times in our national story she may also stand for the fact that on at least one occasion, on 29th December 1940, the City of London was saved from a ‘fire storm’, such as those that destroyed Hamburg and Dresden, by the presence of the Grand Union and Regents Canals. With the Thames virtually empty because of low tides and most water mains shattered by high explosives, the canal was the main source of water to extinguish fires caused by incendiary bombs and which could otherwise have developed into a ‘fire storm’. The iconic picture of St Paul’s Cathedral surrounded by smoke and flames dates from this particular event. Thus Sculptor represents an important part of our national (and indeed world) story.
In 1948, Sculptor was still in the GUCCC fleet when it was nationalised and Sculptor passed into the Docks & Inland Waterways Executive's South Eastern Division Carrying Fleet. She must have been in a fairly poor condition as, shortly afterwards, extensive work was carried out to her bottom and keelson. Not long after this she was transferred to the then North Western Division of the nationalised waterways as a maintenance boat for the Engineering Department at Northwich, Cheshire. In 1960 her 2 cylinder, water-cooled Russell Newbury DM2 18hp engine was replaced with a 2 cylinder, air-cooled Lister HA2 diesel engine and manual Lister Blackstone reduction gearbox..
By 1985 Sculptor had come to the end of her working life and was withdrawn from the canal maintenance fleet and (apart from the engine) was restored at Ellesmere Port, to become part of the British Waterways Museum collection. This included repainting her to GUCCCo's wartime livery. The following year, in July 1986, Sculptor was moved to the Waterways Museum at Stoke Bruerne (now the Canal Museum) as a floating exhibit.
Apart from a brief period when the boat was returned to Ellesmere Port for essential maintenance and a number of longer promotional visits around the canal network, Sculptor has since performed a vital role at Stoke Bruerne.
The Museum Trustees desired Sculptor be re-bottomed in an as original way as possible, hence the decision to use timber rather than the considerably cheaper steel. There now remain very few motor narrow boats of composite structure (i.e. with  iron or steel sides and a wooden bottom). Possibly there is only one other as many have had the wooden bottom replaced by steel." 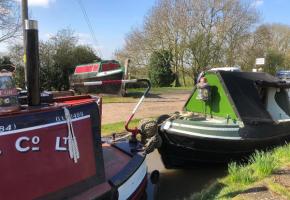 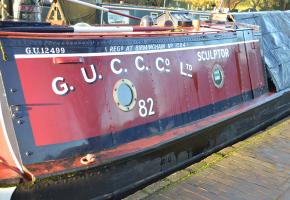 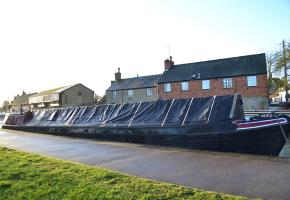 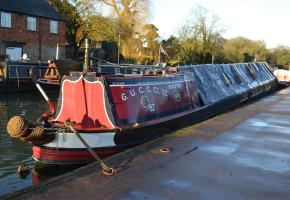