The coppered steel construction of this boat was unique among the Fish Class, though four FMC boats had been built this way previously. Other than the material, the design was similar to the other hulls built for FMC at this time. The orginal Bolinder engine was later replaced with an Armstrong Siddley AS3.

BWB used the front 55’ (with a squared-off stern) for maintenance on the Coventry Canal. Eventually it was abandoned and sunk in Tixall Wide. Having been recovered from the wide by a prospective owner who ran out of money, the hull spent time in the yard of a haulage firm near to Hoo Mill Lock. The boat was subsequently bought by Keith Ball and restored to its original length with a new steel bottom. A full-length cabin was also added and a Lister HA2 was fitted. After several changes of owner, including a year spent on the Lancaster Canal (is this still the only ex-FMC boat to visit this waterway?) it has been used as a continuously cruising liveaboard since 1999. As part of a major refit in 2007-8 the engine was changed to a Lister HR2

The rear 15’ of the boat was sold by BWB to Union Canal Carriers as a pusher tug in 1974. This was later joined to the front 30’ of a BCN day boat (reg. Tipton No. 1909) and used as a hire boat. It is now in private ownership and based on the Coventry Canal at Alvecote. An Armstrong AS3 is fitted, but it is unclear whether this is the one fitted before the original boat was split in two. The Bolinder fuel tank is still in this section of the boat. Wooden cabin was replaced with a steel one around 1994, when the step in the gunwale caused by the two halves not joining exactly, was also corrected.

For photo details, please click i, top left of each photo 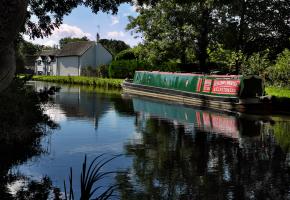 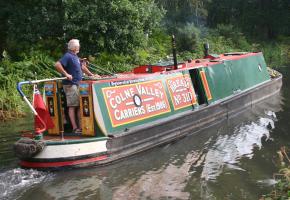 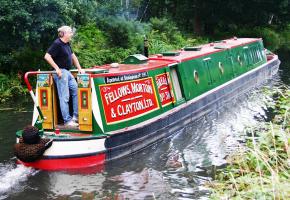 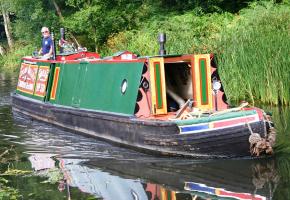 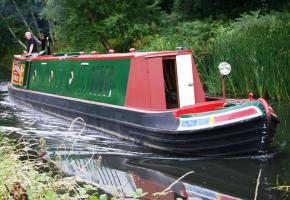 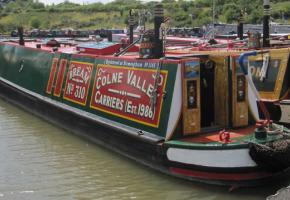