A Story of boat ownership...

For the first twelve years of our married life, we lived afloat. First, on a big old Dutchman, then 'Yarmouth', a Braithwaite Butty motorised unsympathetically in the early sixties, with which we cruised extensively from Guildford to Gargrave. We sold her late '92 and became lodged with my wifes parents. The canal scene had been a 'Been there - done that' experience, albeit with a thousand photographs, millions of memories and friendships more valuable than gold. What next we thought. We'll wait and see.

Seven years went by with the occasional glance over a bridge at a strip of waterway in case I recognised a boat, or a face, but without a longing to return. . . . until - the day I walked into W.H.Smiths and for the first time in seven years purchased a copy of 'Waterways World'. It was the one with an article remembering Ike Argent, I believe, chronicling his life with the waterways, I wanted to read and learn about Ike. Then I came to the classifieds, as you do, and for the first time in seven years my mind focused like a laser on one word - Tycho.

In all of our years afloat we had seen Tycho only three times. The first in 1983 whilst heading North on a Pennine expedition. We spotted her tied on the offside near a pair of cottages somewhere near Napton Junction in Waterways blue and yellow, with this huge lump of steel protruding from the stem in a menacing way - impressive, ugly, but impressive. Thats a piece of kit there, I thought. And that was that. Next sighting was years later, late eighties, belting South by Cooks wharf, all blue, no decoration, no frills, just this formidable blade of steel thrusting through the water capped with a section of telegraph pole for a fender. A nod from the steerer and - gone. Now I started to hear tales of Tycho being one fast boat, with power a-plenty. Then nothing more.

Ironically, our last meeting was whilst delivering 'Yarmouth' to her new owners at Kensal Green. We had tied up at the old aqueduct crossing the North Circular Rd. due to it being de-watered, and awaiting the gang to re-water and open the way. It had been a cold night shortly before Christmas '92 and a quarter inch of ice had formed all across the cut. We heard ice breaking shortly after breakfast and looked out to see what was coming. It was Tycho, slicing along with that high pitched tinkling sound that thin ice makes as it slides away from oncoming bows. But we had just sold up, and had no aims at taking on another boat even if she had been for sale. And so, seven years went by, during which time I had not dreamt, nor hankered after any boat at all.

Until - May 1999, when I made the one off purchase of Waterways World and idly mused through the classifieds, when I saw this ad., I felt a shock go through me like I had grabbed hold of a wet HT lead.

I read, and re-read several times those lines, mentally calculating how much money we could summon up from savings. We almost had it all, bar a few thou. A loan could be secured for the remainder and a bit in the kitty for unforeseen expenses which I knew there would be. But what about Louise? We had been away from the cut, and I knew there were elements of it that had started to rankle her during our last year afloat, I was not sure she would be interested. She saw me reading the ads. and asked if there was anything interesting for sale.
I said "There's Tycho."
-"No! Where? How much?"
"Up at Tim Higtons' - Flyboat"
-"Are you going to take a look?"
"Yes, I'd like to . ."
-"Great! Can we come?"
"Of course, but I didn't think you would be keen on another canal encounter."

By this time Rosie, our daughter of eleven years had caught the gist of the conversation, and wanted to know what was up. Rosie had spent the first five years of her life on Yarmouth, and was instantly excited at the possible prospect of boating again. And so, after a phone call to Tim Higton to check that a visit was in order, we took a packed lunch on the May Bank holiday weekend to view Tycho. I ought to mention that at this time Louise was heavy with our second daughter with a few weeks to go.

We had bought Tycho long before we set off from home. Louise and Rosie were already planning on where we would keep her and where we would be boating with her. To this I had to be Mr. spoilsport and remind them that we were on our way to view a 60 year old lump of rusting metal and rotten bits of wood, and that if we did engage in a purchase, there would almost certainly be expensive remedial work to be carried out in one way and another. "Yes, but - yes but - yes but . . ." came the replies. Like I say, we had bought Tycho long before we had left home.

Arriving at Stockton, we found her afloat, but scruffy. The deck boards were leaking in rainwater, and the hold had several gallons of rusty water sloshing about with unidentified floating objects going to and fro beneath rotten shutts. The gunnel capping and back deck were rotting, the cants were crumbling away leaving one dolly waving around loose, and the tipcats sported considerable moss growth, nothing unusual really. Unlocking the back cabin and pushing back the slide revealed knobstick decoration, 1936 pennies set in the step, brass rails; knobs and finger pulls, a dodgy range with a big brown kettle on it, Buckby can and hand bowl in Braunston style, woodwork and scumble worn from honest hard work, but most of all - a smell of diesel, grease, soot and a little mould - old boat smell. To some, unpleasant. To us, nectar. We had been away too long.

Tim had given us first refusal and had other enquirers. There was no doubt in our minds about purchase. We also knew there was steelwork to be carried out as she was tender round the back end. So, within a week we had paid the asking price, had her docked and blacked all round and set a date for collection. We also had a rough idea how much a worse case scenario would set us back in the way of necessary repairs. The way I viewed it, we had taken on the role of custodians of a piece of historic industrial hardware with intent to retain all that is working maintenance boat in as near 1942 condition as is practical, i.e. no full length conversions; no lengthening; no chopping off the 'blade'; and no extraneous decoration. Tycho is a TOOL of significant importance historically, and therefore we shall try and keep her in a sturdy workmanlike appearance.

After seven years away, single handed boating for four days solid came as a bit of a shock! I was determined to just go steady, but keep going, and by this method using the long days of midsummer I covered the miles, making Buckby bottom around 11pm. having set off a bit late around noon. Second day, Fenny, with a brief stop at Stoke Bruerne and a chat with Barry, a member of museum staff, who reckoned there was a photo of Tycho in a Coventry Canal Societys' book which he fetched out to show me. Third, Maffas top after a morning spent in the engine 'ole attending a loose fan and a dry bearing. That day turned wet around four pm and I was never more pleased than when I saw the familiar face of Ian Tyler on his bike. He'd heard I was on the move and had met me at Ivinghoe locks, "Corr, I dunno, what kept yer?" and "Come on - open it up!" From here on we took turns at lockwheeling on his bike and got pretty well soaked through, tying up after dark. But I've never seen a bigger grin on his face than when standing on Tycho's step with the speedwheel cranked up!

The following morning Ian showed up again at Cowroast on 'Water Control' (he's a BW employee), and co-incidentally was able to see me through to the end of his section at sewerage, lock 58. At the end of the fourth day I had arrived at Cassio where we had taken moorings. All thanks to Ike Argent, we were back on the Cut! (I think he would find that funny!)

Well that was two and a half years ago, during which time we had paid off the loan, and been saving for the day when Tycho would be taken back to Stockton for the necessary steel repair work. 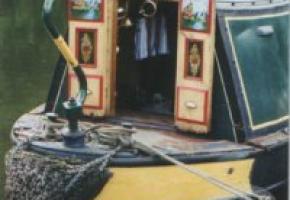 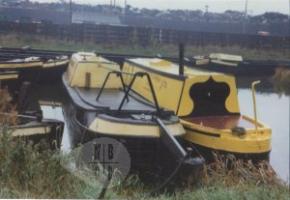 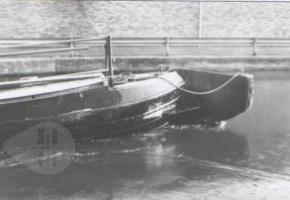 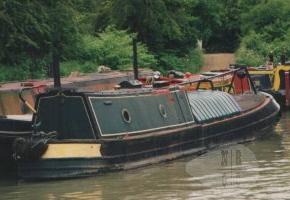 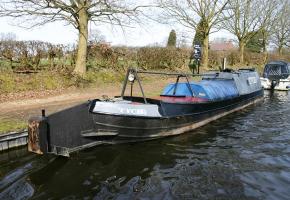 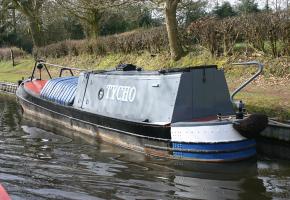