A comprehensive history has been supplied by Paul Monahan as follows:

Madeley was one of only two boats known to be built by Harris’s of Netherton for Fellows, Morton and Clayton Ltd., the other being Malvern (horseboat, fleet No.166). The construction of both boats was iron composite.  Madeley worked for FMC primarily over the Northern waterways between Wolverhampton and Preston Brook. The boat remained in the care of the Shaw family for many years. Madeley was at first used as a horseboat, but later became paired with several motors, but principally Cypress.

After Nationalisation, the fore cabin was removed and the boat was re-registered, again in Birmingham, as 1639. In the 1950s, William Henry Anderson (Bill) and his wife Sarah-Anne had Madeley, paired variously with Roach, Chub and Pike. Their daughters, Ivy and Phyllis, have both been aboard Madeley at Braunston in recent years.

At some time around 1960 Madeley was taken out of trade and used by BWB as a maintenance boat and in the late sixties was reported to be sunk at Stone.

In about 1980, the hull was bought by M.E. Braine and taken back to Norton Canes. Shortly after this, we purchased the major section of the boat comprising some 50 feet including the fore-end and had this rebuilt as a 60 foot motor boat. This length was chosen to allow through passage of the Leeds and Liverpool Canal and (just about) the Calder and Hebble. Whether the stern end of the Madeley still exists is unknown.

The Lister JP3 engine now in Madeley was originally fitted into a crane barge built for British Waterways by James W. Cook & Co. (Wivenhoe) Limited, Wivenhoe, Colchester CO7 9DA. The engine drove the barge through sterngear and a 27” x 29” propeller supplied by Bruntons of Sudbury. Two crane barges were built by Cooks in 1957, each fitted with a JP3 engine. Each engine cost just £537 complete! The propeller being used in Madeley is now 24” by 21” and Madeley is now steel bottomed.

Steel work, engine installation and fitting of the back cabin were completed in Malcolm Braine’s yard and the rebuilt Madeley was launched in June 1983. Madeley’s first journey after the relaunch was to Shipley on the Leeds and Liverpool, visiting the 1983 Wigan Rally en route. We completed all cabin fittings at Shipley. Madeley was in the Midlands area for about 8 years from 1984, based primarily in Gas Street Basin, before transferring to its current base on the Rochdale Canal at Hebden Bridge in 1992. Whilst in Birmingham, Madeley was (somewhat unevenly) paired with Argo until we also bought Tadworth to make an unconverted pair which we used in trade whenever possible. Since the reopening of the Rochdale Canal, Madeley has travelled extensively over the waterways system and can usually be seen at the festivals at Stoke Bruerne and Braunston. London is also a frequent destination.

Records of inspections and steerers are available from Paul & Diana Monahan and from various archives, but any other information or photographs would be welcome. 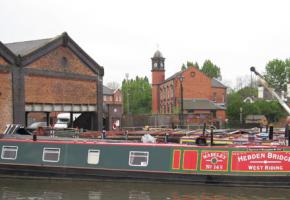 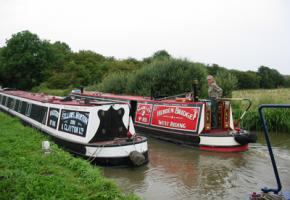