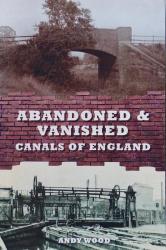 Many thousands of route miles and navigation once used to crisscross England, serving collieries, iron mines, steelworks, towns and villages. From the start of the twentieth century onwards, many of these canals closed down as a result of a lack of trade. Many of the lost canals are in the Midlands, the heartland of Britain’s canal network, but they include the exotically named Tamar Manure Canal and the Royal Arsenal Canal.

Andy Wood gives a brief history of each of England’s lost canals, from the Adelphi Canal to the Woodeaves Canal.

P&P will be added at checkout.